Eggshell Skull: A memoir about standing up, speaking out and fighting back 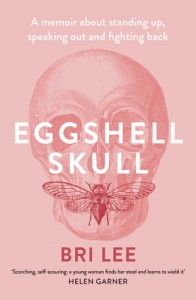 I would describe this book as memoir as suspense. The sense of foreboding created by Lee in the telling is palpable. Her story and those that she relates would be recognised by many women and girls (myself included) as that terrible unspeakable fear that lives within us, the experience of dangerousness and vulnerability at the hands of those we know and possibly even love.

Lee articulately questions how the criminal justice system and our wider society deals with domestic violence and sexual violence. She illustrates this by pointing out the gendered language of victimisation (the accused only pushed their partner against the door, yelled at them and raised his fist, he didn't actually hit the victim). This is language that is not only used by the court, police and lawyers, but by everyone, often including the victims.

Through it is the plaintive cry, why do so many of our men have so much trouble believing us? It seems that for a significant number of men, the only time these issues really hit home is when it is one of their immediate family who is subjected to such violence.

It should be noted that there is no misandry in this novel, Lee celebrates the men in her life who believe these accounts of women. However, as she illustrates, the very low conviction rates of many such offences is evidence that there is a significant proportion of the male population who doesn't. In fairness, there is also a significant proportion of women who don't want to believe it either.

For this reason, I will be promoting this book to the men I know, and women, while acknowledging that in a number of instances I may be preaching to the choir. However, the more this message gets out there, the more we can break down this wall of disbelief.
Tweet